HomeAbout UsSuccess StoriesSince the surgery, I no longer limp and almost feel as good as new. 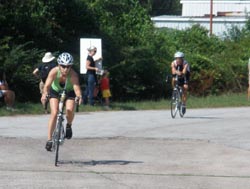 I had surgery to resurface my left hip in March 2005 at the age of 39. I was extremely active for my entire life. I was a gymnast in high school and started running in college. I continued to run after college and started teaching high impact and step aerobics.

I did high-impact type cardiovascular exercises for 2-4 hours per day, 6 days a week. After 10 years of wear and tear on my hip, I couldn't run anymore and limped when I walked. I began road biking because it didn't hurt. Eventually, even road biking hurt.

A local sports medicine orthopedic surgeon took an X-ray and said I had no cartilage in my left hip. He suggested a hip replacement. A second surgeon agreed with the first. I was devastated. I continued to live in pain because I didn't want to have a hip replacement. A friend told me his son had his hip resurfaced and was surfing 8 weeks later.

Another man brought me an article about hip resurfacing and Dr. Gross. I cried because I knew there was hope that I could again have an active lifestyle. I sent my X-Rays to Dr. Gross in November 2004, and when he called me at home a week or two later to discuss my case, I was 90% sure I was going to have him resurface my hip. After all, what doctor calls someone at home to discuss their case? I met with him in January 2005 and scheduled the surgery for March 2005.

Since the surgery, I no longer limp and almost feel as good as new. My main forms of exercise are road biking, the elliptical trainer, walking, spinning and swimming. I've also been able to run a little (3-5 miles, once per week), ski (snow and water), weight lift, hike, and yoga (although I'll probably never be able to do some of the moves).

In September 2009, I competed as part of an all-female team in the Augusta 1/2 ironman. I was the biker on the team and completed the 56-mile course in 2 hours and 54 minutes (19.3 mph average). After I ran the bike to my team-mate in the transition area, I jumped up and down because my time was pretty darn good and because I felt great. Before the surgery, I probably would have averaged closer to 15 mph since my hip would hurt if I pushed too hard.

I honestly believe Dr. Gross, Lee Webb, and their team gave me my life back. Not just my physically active life, but my mental life. I'm happier and I no longer snap at people because my hip hurts. I've found exercise is the best way for me to relieve stress. With age, I learned to work out smarter because I want this hip to last!

Find us on Google+