HomeAbout UsSuccess StoriesI know I received a great gift from a caring, gifted and innovative team. 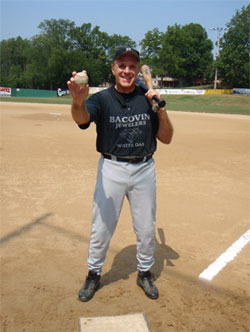 Hi everyone – I wanted to give you all an update as to some of my activities since surgery on April 30, 2007.

This summer I have been riding my jet ski, swimming, lifting weights and do pretty much anything I want.

After Dr. Gross cleared me to play baseball (hardball) at my one year check-up (April 2008), I started to do some running on grass.  I also started throwing and hitting with great results.  I just now (September 24, 2008) finished playing in our summer baseball league (July – September).  We tied for the league championship.

I run the bases, play the outfield and run down fly balls and line drives. I hit both right-handed and left-handed. I am a former Division I baseball player and had played after college until I was unable to play because of my hip arthritis.  I really missed playing. Now, I can play again and I FEEL GREAT!

These photos were taken at our field. I am holding the ball I hit for my first base hit after my surgery. I now plan to go to Florida in November to play in the Roy Hobbs Tournament again after missing four years.

So as you can tell, my experience with the Biomet Cementless ReCap has been GREAT!!!  Every day I am reminded of how fortunate I am to have been a patient of Dr. Gross and Lee Webb and I am thankful to them every day. I share my experience with others I meet who are in pain and need the same surgery.

I know I received a great gift from a caring, gifted and innovative team. Their talent and dedication are unsurpassed.  I will never be able to thank all my friends at Midlands Orthopaedics enough…but I will keep trying.

This is a short video of me batting this past season (July 2009). I only hit a single here, but you can see that I was able to get started quickly out of the batter's box on my "new right hip" and "scoped" left knee. You can see that I turn into the hip and knee with no problem, and sprint toward first. I do slow down going to first base since I was not going to get to second anyway.