HomeAbout UsSuccess StoriesDo your research and select the best surgeon possible – like I did. 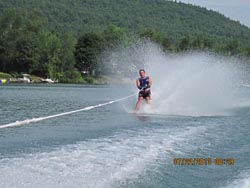 In 2010 and early 2011 my arthritic right hip finally forced me to give up or cut back on a lot of the activities I loved–competing in triathlons with my son, winter hiking on snowshoes, and barefoot water skiing.

In addition, snow skiing, slalom water skiing, and just plain walking without limping became problematic. As I researched hip resurfacing and found Dr. Gross, I began to have hope for the resumption of a lot of the activities, but I must admit I was skeptical when Dr. Gross told me I could resume ALL of my prior activities, even barefoot water skiing. I had the surgery in October 2011 and my recovery went very well–the hardest part was holding back from TOO much activity.

I was able to resume slalom water skiing in the summer of 2012 and snow skied extensively in the winter of 2012 / 2013. Although I only run occasionally now, I do cycle extensively and have resumed hiking as well.

During a summer vacation in July of 2013, my 23-year-old son challenged me to barefoot ski again–an activity I had dropped several years ago. I was able to get up "long-line" on the first attempt! The hip was fine; the rest of my body and muscles were sore, though.

For anybody contemplating a resurfacing operation, I would encourage you to do your research and select the best surgeon possible – like I did.